This observational study was carried out to investigate the effect of intravenous (i.v.) iron administration on the clinical symptoms of restless legs syndrome (RLS) in geriatric outpatients over 65 years old.

In this study geriatric outpatients (mean 4.5 ± 3.4 comorbidities and 5.7 ± 4.4 drugs taken) were recruited according to the following inclusion criteria: ≥ 65 years, diagnosis of RLS due to iron deficiency, i.e. ferritin < 50 µg/l or transferrin saturation (TFS) < 16 %) as well as no other iron therapy within 2 weeks prior to the study. Of the patients 7 (41 %) received 500 mg ferric carboxymaltose (FCM) and 10 patients (59 %) received iron gluconate (62.5 mg) based on the degree of iron deficiency. As assessed by the international RLS severity scale (IRLS) symptoms were recorded 3 times: at the beginning of iron therapy (t0), after 2 weeks (t1) and after 12 weeks (t2).

In this study group of geriatric outpatients i.v. administration of iron was associated with a significant improvement of symptoms in RLS as assessed by the IRLS score 2 weeks after treatment. In geriatric patients with RLS associated with iron deficiency, i.v. iron administration should be considered regarding improvement of RLS symptoms and ADL. 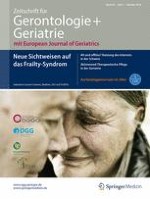