To evaluate the extent of concomitance of sarcopenia as defined by the European Working Group on Sarcopenia in Older People (EWGSOP) and osteoporosis as defined by the World Health Organization (WHO) in geriatric inpatients and their relationship to nutritional and functional status.

Osteoporosis and sarcopenia are linked to nutritional deficits and reduced function in geriatric inpatients. Co-occurrence (osteosarcopenia) is common and associated with a higher degree of malnutrition than osteoporosis or sarcopenia alone.

Sarcopenia and osteoporosis are highly prevalent in old people and contribute to a variety of negative health outcomes [1]. As reflected by the term osteosarcopenia there is an increasing awareness of the interrelationship between muscle and bone disease [1] regarding genetic regulation [2], the endocrine framework [3] and close mechanical interaction [4]. Another common feature of both conditions is structural degradation due to lipotoxicity [5].
Sarcopenia-associated risk of falling and increased bone vulnerability have a synergistic impact on fracture incidence [6]. Despite being named the hazardous duet [7] both conditions are treatable, with a substantial overlap in the options available (exercise, protein supplementation, vitamin D) [8]. While there are some prevalence data from community dwelling elders, in particular fallers [9] and patients with a history of hip fractures [10], data from geriatric hospitals about osteosarcopenic patients are widely lacking.
Anzeige
In order to determine the frequency of co-occurrence of sarcopenia and osteoporosis and the functional and nutritional characteristics accompanying these conditions in geriatric inpatients the dataset of the SAGE study [11] was examined.

The SAGE study is a cross-sectional study concerned with issues of muscle mass measurement in geriatric inpatients. Preliminary results and study design have been published elsewhere [11]. Briefly the study recruited 148 geriatric inpatients (99 female and 59 male) at the department of Geriatric Medicine, Paracelsus Medical University Salzburg. Inclusion criteria were admittance to a geriatric ward in the study period, ability to walk a few meters and to lie still for 5 min. The lower age limit was 70 years. Exclusion criteria were critical or terminal illness, advanced dementia or delirium, indwelling electrical devices such as pacemakers (bioimpedance analysis being part of the study protocol) and complete or partial amputation of one or more limbs. All participants gave written informed consent. The study was approved by the local ethics committee of the state of Salzburg. For the ancillary osteosarcopenia investigation all SAGE participants with a sufficient dataset were included to enable the diagnosis of sarcopenia and osteoporosis.

Baseline characteristics.
In addition to age and gender, the number of comorbidities (out of the nine following: cardiovascular disease, chronic heart failure, cerebrovascular disease, obstructive pulmonary disease, diabetes, renal failure, hypertension, cancer and dementia) were looked into. Besides the number of medications, the life setting (community dwelling vs. institutionalized) and the use of a walking device were assessed. Furthermore, the number of patients in which initial hospital admission was due to fractures was retrieved. Information was obtained from the clinical records.
Functional and nutritional parameters.
Gait speed and hand grip strength were measured in all individuals, partly for the diagnosis of sarcopenia but also for comparison between study subgroups. Gait speed was measured over a distance of 5 m. Hand grip strength was measured with a JAMARR hydraulic hand dynamometer (Ametek, Chicago, IL, USA). A total of six measurements were performed alternating left and right side and the maximum value was selected. The Barthel index at admission and BMI were obtained from the clinical records. The MNA-SF (and if pathologic full MNA) was assessed by a dietician.
Diagnosis of sarcopenia.
Diagnosis was based on the EWGSOP criteria, comprising gait speed, handgrip strength and appendicular muscle mass derived from dual energy X‑ray absorptiometry (DXA) [12]. A gait speed of ≤0.8 m/s was considered pathologic. Low hand grip strength was defined as <30 kg for men and <20 kg for women. The Hologic Discovery A (S/N 85001 Hologic Inc. Marlborough, MA, USA) was used for all DXA scans. The scan measurements and analyses were conducted following standard procedures. Participants were measured wearing only gowns to eliminate possible artifacts due to clothing and fasteners. Whole body scans were manually analyzed for the manufacturer-defined regions of interest (ROI) following the standard analysis protocol in the Hologic User Manual. Customized ROI were also analyzed using the Hologic whole body and subregion analysis modes (software ver. 13.3.01). Appendicular skeletal muscle mass (ASMM) was directly derived from the appendicular soft lean tissue compartment in the DXA studies and denoted ASMMDXA. For DXA-derived muscle mass the thresholds communicated by Baumgartner et al. [13] were applied based on an appendicular skeletal muscle mass index (ASMMI): ASMMIDXA < 7.26 kg/m2 for men and <5.5 kg/m2 for women.
Diagnosis of osteoporosis.
Bone mineral density (BMD) measurements were performed at three sites in the same session and with same DXA device: lumbar spine (L2–L4), total hip and femoral neck. A T-score of ≤−2.5 standard deviation (SD) at any location was considered diagnostic of osteoporosis [14].
Diagnosis of osteosarcopenia.
Osteosarcopenia was diagnosed when both sarcopenia and osteoporosis were present.
Data analysis.
The basic pattern of data analysis was to divide the study group into 4 subgroups: 1. sarcopenia without osteoporosis, 2. osteoporosis without sarcopenia, 3. osteosarcopenia (both conditions present) and 4. absence of both conditions (the latter defined as the reference group). For some of the analyses all sarcopenic (with or without osteoporosis) and all osteoporotic (with or without sarcopenia) patients were pooled. Statistical analysis was performed by SPSSR statistics 24. Descriptive values are presented as mean ± standard deviation (±SD). Fisher’s exact test was used for the analysis of qualitative data. Significance of quantitative differences between subgroups was determined by unpaired t‑test. To check for the confounding effect of age and gender multiple regression analysis was used, when means between subgroups were compared. For contingency tables the Mantel-Haenszel method of weighted odds ratios was applied. A p-value <0.05 was considered significant.

In terms of age, comorbidity, polypharmacy and walking limitation (use of walking device) this sample reflected the diversity of hospitalized geriatric patients. The sex ratio (59.6% women) is consistent with the predominance of women on a geriatric ward. The characteristics of this sample match the features of geriatric inpatients as described exemplarily in a cohort study by von Renteln-Kruse and Ebner [16]. The prevalence of osteosarcopenia was 14.2% with a non-significant tendency for higher prevalence (16.7% vs. 10.5%) among women. This is in line with a Chinese study reporting a prevalence of 15.1% (women) and 10.4% (men) in community dwelling elders over age 80 years [15]. Recently Locquet et al. found a prevalence of 9.52% in an exclusively female population (mean age 74.3 years) from Belgium [17]. Some studies [9, 10] reported considerably higher prevalence rates (58% [9], 37.9% [10]) but these referred to preselected populations of female hip fracture patients and fallers, respectively. Osteoporosis was more frequent in sarcopenic (51.3%) than non-sarcopenic (21.6%) subjects. A higher osteoporosis prevalence with respect to sarcopenia status was described in earlier studies (46.1% vs. 22.0% [17], 58.5% vs. 36.4% [9], 57.8% vs. 22.0% [18]) and was seen in both female and male subjects. The nutritional state of all sarcopenic, osteoporotic and osteosarcopenic patients was characterized by lower BMI and MNA-SF compared to the reference group. The BMI and MNA-SF were lowest in osteosarcopenic subjects with a significant difference not only compared to normal but even compared to the barely sarcopenic and barely osteoporotic subjects. A worse nutritional state in osteosarcopenic subjects was also observed by Huo et al. [9] who concluded that thorough nutritional assessment and early supplementation were especially important in this subgroup.
All three pathologic conditions were accompanied by lower gait speed. This was also true for hand grip strength in women and both sexes combined. In men the difference in hand grip yielded statistical significance after pooling the different disease subgroups. A lower Barthel index was associated with sarcopenia and osteosarcopenia but not with osteoporosis. There was no significant difference in functional parameters between the osteosarcopenic and the barely osteoporotic or sarcopenic. Drey et al. [1] reported decreased hand grip strength for the osteosarcopenic subgroup in a population of 68 prefrail individuals but did not find any difference in gait speed; however, this study is not directly comparable due to a different definition of osteosarcopenia which included osteopenic patients with sarcopenia. In a larger (n = 680) Australian population of older fallers the osteosarcopenic individuals had decreased hand grip strength as well as gait speed. Previous data pertaining to ADL status in osteosarcopenia could not be found.
There are important limitations to this study. First, due to exclusion of the most frail and demented patients, the population might not entirely reflect a geriatric ward population; however, it is probable that the selection bias is towards underestimation of prevalence rates. Second, the study lacks statistical power especially due to the low number of males with osteoporosis or osteosarcopenia. Larger multicenter studies are needed that allow stratification of the independent contributors to osteosarcopenia. Finally, it is a cross sectional study that does not allow the establishment of chronological or causal relationships in the pathways leading to osteosarcopenia. The strength of the study is to deliver data from a geriatric hospital giving the clinician an idea about the prevalence, the degree of overlap and the associated nutritional and functional deficits of two highly important pathologies of the locomotor and skeletal system.

Osteoporosis and sarcopenia are prevalent conditions on a geriatric ward. Both are related to poor function and malnutrition. Co-occurrence (osteosarcopenia) is frequent and it is associated with a more compromised nutritional state than isolated osteoporosis or sarcopenia. The use of DXA might prove useful in co-diagnosing the two conditions. 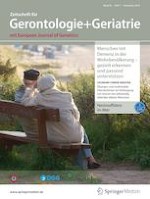