Following the heat wave of August 2003 that caused over 70,000 fatalities in Western Europe, heat-health action plans (HHAP) and heat warning systems were implemented in many European countries, including Germany. The effect of these preventive measures (informing the population as well as nursing and medical personnel) on excess mortality during heat waves in Frankfurt am Main, Germany, is studied, taking into account newly published data on a modifying effect of air pollution on heat mortality.

Mortality data comprising all deaths registered in the city of Frankfurt was obtained from the statistical state office; air temperature and air pollution data in Frankfurt Ost were obtained from the Hessian state office for environment and geology. SPSS Version 15 was used for statistical analysis (bivariate and partial correlations, nonparametric tests/Kruskal-Wallis, and Mann-Whitney test).

Lower excess mortality could be seen in Frankfurt am Main during heat waves following the implementation of HHAP and the heat warning system. This might be an effect of the measures implemented by the HHAP to reduce heat mortality. However, it cannot be ruled out that this might also be an effect of shorter heat wave periods and lower air pollution in the subsequent years. Therefore, further efforts are needed to improve the resilience of the population, especially the elderly population, to better cope with heat waves.

Titel
Heat waves and mortality in Frankfurt am Main, Germany, 2003–2013
What effect do heat-health action plans and the heat warning system have?
Autoren:
PD Dr. U. Heudorf
M. Schade 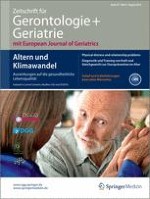 The challenges posed by climate change to successful ageing