The management of severe medical events during spaceflight represents an exceptional challenge. Thanks to the intense medical screening performed during astronaut selection, significant medical problems have remained uncommon during training and space missions, despite some 125 person-years of cumulated presence in space. The risk of severe medical events, particularly during long-term missions, e.g. to Mars, is nevertheless significant. Many gaps still remain in our understanding of the human response to the space environment and several critical risks associated with interplanetary space travel—such as protection against radiation exposure or delivery of autonomous medical care—remain unresolved.

Both the expected medical conditions and the acute care capabilities differ greatly between Earth and space. While the options in modern medical facilities on the ground are potentially limitless, the equipment and immediate expertise available in space are very limited. For this reason, an emphasis is put on prevention of emergencies. Even after a successful initial stabilisation in low Earth orbit, postresuscitation care would prove problematic. The International Space Station (ISS) does not have the capability to deliver prolonged life support. Furthermore, evacuation from low Earth orbit with current capabilities may not be possible for an unstable, critically ill or intubated and ventilated patient, because of limited volume in the Soyuz capsule and the high deceleration profile.

Future space exploration missions will push back the limits of human experience in maintaining health and performance of crew members. Many issues will have to be addressed before humanity can venture beyond low Earth orbit with an acceptable level of risk.
Anzeige
Vorheriger Artikel Notfallmedizin unter Extrembedingungen
Nächster Artikel CPR im Weltall 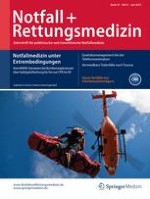