To date, short dementia screenings are often limited by poor specificity or still take too much time with respect to the restricted resources of primary care physicians and the increasing number of dementia disorders. As a new instrument, the three-question dementia screening (SDTP, Salzburg Dementia Test Prediction) should be compared with the eight-item screening of Chen et al. and the CERAD battery (Consortium to Establish a Registry for Alzheimer’s Disease), focusing on specificity and economy of time.

We tested 404 patients (243 women). The mean age of the subjects was 80.1 years (SD = 6.8) for men and 83.2 years (SD = 6.0) for women. The mean Mini-Mental State Examination (MMSE) score was 21.9 (SD =  5.8) for men and 21.1 (SD =  6.3) for women. Artificial neural networks (ANNs) were used to find a mathematical model that allows the total MMSE to be predicted with only three questions of the MMSE. This is achieved by multiplying the outcome of the three best predictor questions with a weighting coefficient, which was delineated by using ANNs.

The SDTP is a time-saving instrument for screening of dementia, which is as sensitive as and more specific than the eight-item screening of Chen et al. and provides a prediction of the MMSE with high accuracy. 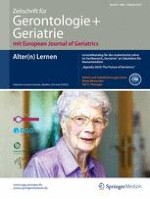