A correlation between asymmetry in electroencephalographs (EEG) and depression has been demonstrated in many studies. To the best of our knowledge there are no studies including oldest old geriatric patients.

The objective of this study was to evaluate whether frontal and parietal alpha asymmetry can be used to differentiate between depressed and control patients in a cohort sample with a mean age of 80 years.

A differentiation between the three groups was not possible with FAA and PAA. Significant correlations were found between PAA alpha 3 band and anxiety and depression.

The alpha asymmetry in EEG seemed to disappear with age. Correlations between PAA and anxiety and depression were found. The results are in line with the right (hemisphere) hemi-aging hypothesis. 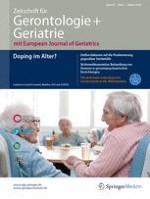