The incidence of chronic respiratory diseases (e.g., chronic obstructive pulmonary disease, COPD) and interstitial lung diseases (e.g., pneumonia and lung fibrosis) increases with age. In addition to immune senescence, the accumulation of senescent cells directly in lung tissue might play a critical role in the increased prevalence of these pulmonary diseases. In the last couple of years, detailed studies have identified the presence of senescent cells in the aging lung and in diseased lungs of patients with COPD and lung fibrosis. Cellular senescence has been shown for epithelial cells of bronchi and alveoli as well as mesenchymal and vascular cells. Known risk factors for pulmonary diseases (cigarette smoke, air pollutions, bacterial infections, etc.) were identified in experimental studies as being possible mediators in the development of cellular senescence. The present findings indicate the importance of cellular senescence in normal lung aging and in premature aging of the lung in patients with COPD, lung fibrosis, and probably other respiratory diseases.
Anzeige
Vorheriger Artikel Aging—mechanisms, models, and translation
Nächster Artikel Healthy aging: what can we learn from Caenorhabditis elegans? 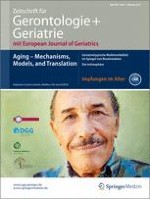 Healthy aging: what can we learn from Caenorhabditis elegans?