The prevalence of falls in adults aged 40 years or older in an urban, German population | springerpflege.de Skip to main content
SUCHE MENÜ 1 2 3 4

Single or frequent falls lead to increased morbidity due to fall-related injury, fear of falling, impairments in quality of life and loss of independence. To assess the impact of falls, prevalence data are essential.

In 2006, a telephone survey was performed in a random sample of 1270 inhabitants of the city of Herne, Germany, aged 40 years or older. Participants were asked about falls during the previous 4 weeks and 6 and 12 months, respectively. A fall was defined as an unexpected event in which the individual comes to rest on the ground, floor or a lower level. Participants were also asked about pain and whether or not a medical diagnosis of osteoporosis had ever been made. Standardized prevalences and odds ratios (OR) with 95 % confidence interval are reported.

In total, 862 (67.9 %) adults participated. Participants were significantly older than non-participants and more often female than male. Prevalences standardized for the population of Herne for at least one fall within the previous 4 weeks or 12 months or two or more falls within 12 months, respectively, were 3.1 %, 12.1 %, and 4.5 %. Women were more often affected than men. A total of 2.3 % participants reported both at least one fall and a medical diagnosis of osteoporosis. The prevalence of falls increased with increasing age and was also related to musculoskeletal pain.

Titel
The prevalence of falls in adults aged 40 years or older in an urban, German population
Results from a telephone survey
verfasst von
J. Schumacher
L. Pientka
U. Trampisch
A. Moschny
T. Hinrichs
Dr. U. Thiem 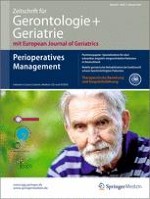 Mode of anesthesia, mortality and outcome in geriatric patients