This article traces the development of Emergency Medicine as a hospital-based specialty in Europe over the last 20 years. 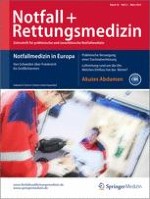