Assistive robots could be a future means to support independent living for seniors.

This article provides insights into the latest developments in social service robots (SSR) based on the recently finished HOBBIT project. The idea of the HOBBIT project was to develop a low-cost SSR which is able to reduce the risk of falling, to detect falls and handle emergencies in private homes. The main objective of the project was to raise the technology to a level that allows the robot to be fully autonomously deployed in the private homes of older users and to evaluate technology market readiness, utility, usability and affordability under real-world conditions.

During the initial phase of the project, a first prototype (PT1) was developed. The results of laboratory tests with PT1 were used for the development of a second prototype (PT2), which was finally tested in seven households of senior adults (mean age 79 years) for 3 weeks each, i.e. in total more than 5 months.

The results showed that PT2 is intuitive to handle and that the functions offered meet the needs of older users; however, the robot was considered more as a toy than a supportive device for independent living. Furthermore, despite an emergency function of the robot, perceived security did not increase.

Reasons for this might be a lack of technological robustness and slow performance of the prototype and also the good health conditions of the users; however, users believed that a market-ready version of the robot would be vital for supporting people who are more fragile and more socially isolated. Thus, SSRs have the potential to support independent living of older people although the technology has to be considerably improved to reach market readiness.
Anzeige
Vorheriger Artikel Designing a social and assistive robot for seniors
Nächster Artikel Robot deployment in long-term care 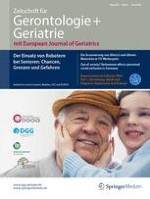 Designing a social and assistive robot for seniors