The prevalence of chronic obstructive pulmonary disease (COPD) and lung emphysema increases with age and both lung diseases are again risk factors for lung cancer. Since a reduced capacity of fibroblasts for proliferation is a good indicator of tissue aging, we studied the cell proliferation of lung fibroblasts from normal and tumor tissue of lung cancer patients depending on lung comorbidities.

Fibroblasts were isolated from tumor and normal lung tissue of 40 lung cancer patients. Cumulative population doubling (CPD) was determined to assess the proliferation capacity, and the PCR technique was used to measure telomere lengths. Since many patients had previously been exposed to severe air pollution, we also studied the effect of air pollution particles on the fibroblast CPD in vitro.

Fibroblasts from tumor and normal lung tissue had comparable CPDs; however, the CPD of fibroblasts from both tumor and normal lung tissue was significantly reduced in patients also suffering from COPD. This CPD reduction was highest in COPD patients who had already developed emphysema or were smokers. A significant correlation between CPD and telomere length was identified only for fibroblasts of non-COPD patients. Further studies also showed an adverse effect of air pollution particles on the CPD of lung fibroblasts.

Lung cells of COPD patients are characterized by accelerated senescence which must have been initiated prior to lung tumorigenesis and cannot depend on telomere shortening only. In addition to smoking as a known risk factor for COPD and lung cancer, air pollution particles could be another reason for the accelerated senescence of lung cells.
Anzeige
Vorheriger Artikel Umzugsentscheidungen in Pflegeeinrichtungen bei älteren Menschen mit geistiger Behinderung
Nächster Artikel Einzelaktivierung von Menschen mit Demenz im häuslichen Setting 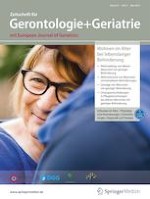 Do independent geriatric outpatients with nocturnal polyuria profit from desmopressin?