Health care utilisation (HCU) can be a useful outcome for estimating costs and patient needs. It can also be used as a surrogate parameter for healthy ageing. The aim of this study was to analyse the associations of formerly described and potentially new parameters influencing health care utilisation in older adults in Germany.

The ActiFE Ulm (Activity and Function in the Elderly in Ulm) study is a population-based study in 1,506 community dwelling older adults aged 65–90 years in Ulm and surrounding areas in southwestern Germany. Between March 2009 and April 2010 a full geriatric assessment was performed including accelerometer-based average daily walking duration, comorbidity, medication, physical and psychological functioning, health care utilisation, sociodemographic factors etc. The association between above named measures and health care utilisation, represented by the number of drugs, the days in hospital and the number of physician contacts over one year was calculated in multiple regression models. Analysis was conducted among subjects with complete information (n = 1,059, mean age 76 years, 55% male).

Reduced walking activity, self-rated health and/or comorbidity and male sex are the best predictors of health care utilisation as measured by the number of drugs and number of physician contacts over 12 months. Walking activity could be regarded as the most promising modifiable predictor of HCU in older adults. 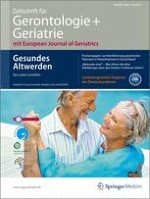