The duration of the intervention was 12 weeks. Both groups underwent physical training three times a week for 30 minutes. In addition, the experimental group received pelvic floor muscle training in different positions and with dual cognitive tasks two times a week for 30 minutes. We used The International Consultation on Incontinence Questionnaire (ICIQ-UI SF), the modified Voiding Diary, and the Overactive Bladder Questionnaire(OAB-q). The risk of falls were assessed according to Tinetti’s Performance Oriented Mobility Assessment. Fear of falls was assessed by the Falls Efficacy Scale.

The PFMT-DT proved to be an effective intervention in improving the symptoms of OAB and UUI. We were able to significantly reduce the risk of falls according to POMA by about 21% (19.2 ± 2.7 to 23.20 ± 3.25%) in older women with UUI.
Anzeige
Vorheriger Artikel Screening for depression in old age
Nächster Artikel Dekubitus – eine vielschichtige Herausforderung 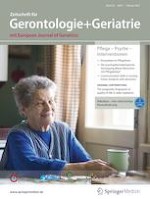