Parameters of bone health and fracture risk in older female fall victims: what do they tell us? | springerpflege.de Skip to main content
TOOLBAR 1 2 3 4
SUCHE MENÜ 1 2 3 4

A common and severe osteoporotic type fracture in older women is a hip fracture. It is not clear whether bone turnover parameters measured in blood can be a useful tool to predict fracture risk in older persons. The aim of the current study was to assess the association between serum vitamin D (25OHD) levels, parathyroid hormone (PTH), total osteocalcin, carboxy-terminal collagen crosslinks (CTX) and hip fractures in older fallers.

A single centre, prospective cohort study of bone parameters was carried out in 400 female patients aged > 70 years including 200 with a hip fracture and 200 without fractures, admitted after a fall between January 2005 and December 2007.

Serum total osteocalcin levels were significantly lower in the fracture group compared to the non-fracture group (20.4 ng/ml vs 26.1 ng/ml, respectively, p = 0.01). This finding remained significant after exclusion of the patients on bisphosphonates (p = 0.003). There were no significant differences in 25OHD, PTH or CTX levels between the two groups.

In the current study there was an association between the presence of a hip fracture and lower total serum osteocalcin concentrations. This could be indicative of low bone turnover osteoporosis in these women. An association for other bone turnover markers was lacking. 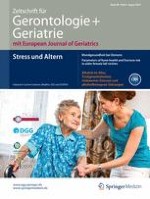