This scoping review analyzed nonpharmacological intervention programs for older inpatients with or without cognitive decline on regular or acute geriatric wards to present the range of interventions.

Only few programs were described for older inpatients and even fewer regarding pre-existing cognitive decline. The low numbers of interventions and data heterogeneity restricted the assessment of outcomes; however, delirium incidence, as reported by two thirds of the studies was reduced by nonpharmacological multicomponent interventions. 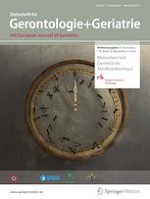 SPMSQ for risk stratification of older patients in the emergency department