» Jetzt Zugang zum Volltext erhalten
Emergency department (ED) crowding is an increasing public health crisis in the U.S. and around the world. A burgeoning literature has found associations between ED crowding and negative outcomes, such as poor quality care, medical errors, inpatient complications, and higher mortality rates [ 1, 2]. A recent report detailed increased crowding across 16 countries, including Germany. Similar to many other industrialized countries, ED visit volume and crowding are both increasing in Germany [ 3]. Recent surveys in Germany have found increases in ED visits by 4% in 2006 and 8% in 2007, with an estimated 12 million visits in 2007; however, there are no official national statistics on German ED visits [ 3]. ... 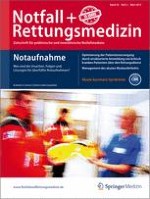