Do physicians and nurses agree on triage levels in the emergency department? A meta-analysis | springerpflege.de Skip to main content
TOOLBAR 1 2 3 4
SUCHE MENÜ 1 2 3 4

» Jetzt Zugang zum Volltext erhalten
Wichtige Hinweise
This article is freely accessible via the “Editors Pick” Choice.
You can find a commentary in German on this article written by Professor Dormann and Professor Christ in this issue and digitally at https://​doi.​org/​10.​1007/​s10049-019-0581-5.

Detailed searches of a number of electronic databases were performed up to 1 September 2018. Studies that reported sample sizes, reliability coefficients, and a comprehensive description of the assessment of the inter-rater reliability of physicians and nurses were included. The articles were selected according to the Guidelines for Reporting Reliability and Agreement Studies (GRRAS). Two reviewers involved in the study selection, quality assessment, and data extraction performed the review process. The effect size was estimated by z-transformation of reliability coefficients. Data were pooled with random-effects models, and a meta-regression was performed based on the method of moments estimator.

Titel
Do physicians and nurses agree on triage levels in the emergency department? A meta-analysis
Autoren:
E. Pishbin
M. Ebrahimi
A. Mirhaghi 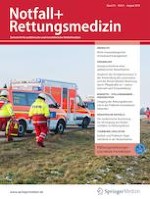