Depression and cognitive disorders, including dementia and mild cognitive impairment, are common disorders in old age. Depression is frequent in dementia, causing distress, reducing the quality of life, exacerbating cognitive and functional impairment and increasing caregiver stress. Even mild levels of depression can significantly add to the functional impairment of dementia patients and the severity of psychopathological and neurological impairments increases with increasing severity of depression. Depressive symptoms may be both a risk factor for, as well as a prodrome of dementia. Major depressive syndrome of Alzheimer’s disease may be among the most common mood disorders of older adults. Treating depression is therefore a key clinical priority to improve the quality of life both of people with dementia as well as their carergivers. Nonpharmacological approaches and watchful waiting should be attempted first in patients who present with mild to moderate depression and dementia. In cases of severe depression or depression not able to be managed through nonpharmacological means, antidepressant therapy should be considered.
Anzeige
Vorheriger Artikel Komorbide Erkrankungen bei Demenz
Nächster Artikel Schlafstörungen bei Demenzkranken 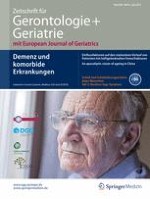 Effects of inpatient geriatric interventions in a German geriatric hospital