Patients with end-stage renal disease (ESRD) requiring hemodialysis are typically characterized by multimorbidity and increasingly by advanced age; however, there are few data on their geriatric needs.

The aim of the study was to evaluate the clinical characteristics of a large cohort of incident patients in ambulatory hemodialysis units with a particular focus on those aged over 80 years in Germany.

The electronic patient registry of the Board of Trustees (Kuratorium) for Dialysis and Kidney Transplantation (KfH) was searched for all patients who began hemodialysis in 1 of the 191 units between 2007 and 2013 and were 65 years and older. Patients were analyzed by age (65–79 years and ≥80 years) for clinical and biochemical characteristics, mortality, quality of life and hospitalizations.

Of the 21,355 incident patients, a total of 13,872 (65%) were over 65 years old, with 9998 (46.8%) aged between 65 and 79 years and 3874 (18.1%) patients 80 years or older (oldest old). The spectrum of morbidity was comparable between the two age groups but there was a significantly higher prevalence of anemia, hypoalbuminemia and multimorbidity (>four comorbidities) in the older age group. Median survival was 4.5 years (1638 days) in the younger age group and 2.7 years (978 days) in the older group. Almost half of the patients experienced at least one episode of hospitalization during the first year but there were no significant differences between the age groups (45.9% in younger vs. 47% in older patients). In the older age group 463 (12%) patients survived more than 5 years after initiation of hemodialysis despite the presence of multiple risk factors for adverse clinical outcome.

More than half of the chronic ambulatory hemodialysis patients were of advanced age and had a very high burden of multimorbidity. Nevertheless, a subgroup of ERSD patients over 80 years old survived at least 5 years on hemodialysis despite the presence of multiple risk factors for adverse clinical outcome. Identification of these patients as well as optimized care for frail hemodialysis patients will require application of geriatric assessment tools in addition to traditional parameters in nephrology. The development and validation of such tools should be the subject of further clinical studies.
Anzeige
Vorheriger Artikel Professional caregivers’ knowledge in dermatology
Nächster Artikel Blasenentleerungsstörungen bei geriatrischen Patient(inn)en 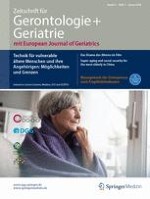