Mutations in genes encoding tumor necrosis factor (TNF)-α and interleukin (IL)-6 were previously shown to affect mortality. Single nucleotide polymorphisms (SNPs) in the functional promoter regions of TNF-α (G308A) and IL-6 (G174C) are among the most widely studied.

To determine whether TNF-α G308A and IL-6 G174C SNPs confer susceptibility to longevity, we performed a meta-analysis to comprehensively estimate the association between these SNPs and longevity in long-lived individuals (LLI, aged ≥ 80 years).

Studies addressing the role of TNF-α and IL-6 SNPs in longevity were identified from the PubMed database. Pooled ORs with 95 % confidence intervals (CIs) were used to assess the association between SNPs and longevity.

We found no evidence that the TNF-α G308A and IL-6 G174C SNPs affected the probability of reaching an advanced age in Caucasians, and that they have little effect on delaying the onset and progression of age-related diseases, but this does not rule out the possibility of population-specific effects caused by different genes and/or environmental factors and their interactions.
Anzeige
Vorheriger Artikel „Doing Gender“ im Altenpflegeheim
Nächster Artikel Wer sind eigentlich diese „Personen mit eingeschränkter Alltagskompetenz“? 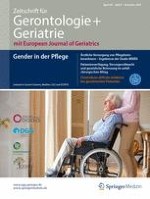 „How is health created?“