This study investigated the association between age and falling direction in patients with hip fractures.

This study analyzed the medical records of older patients with fall-related hip fractures who were hospitalized in 2011–2018. Demographic (sex, age, and body mass index, BMI), medical and clinical (body mineral density, type of fracture, and cognitive function), and lifestyle variables (use of assistive device for locomotion and place of residence) and characteristics of falling (direction and location) were extracted. These were compared between the patients aged between 65 and 84 years (65–84 group) and over 85 years (85+ group). Multivariable logistic regression analysis was conducted to investigate associations with each falling direction (forward, sideways, and backward) with other variables.

These results suggested that the falling direction was associated with age but not with other variables investigated in this study in older patients with hip fractures.
Anzeige
Vorheriger Artikel Sturzereignisse – Vorhersage und Nachsorge
Nächster Artikel Die ersten Schritte nach einer hüftnahen Fraktur 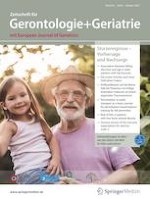